Breakfast is a hallowed time in our home. Not brunch…breakfast. I primarily blame my husband for this tradition. He isn’t one for typical traditions but when it comes to breakfast on the weekend, it is sacred, it has to be from a skillet, and it happens before 9AM.  He was the crazy friend in college that would wake up one too many friends knocking on their door at 7 AM saying “it’s BREAKFAST TIME”.

But now that we are in our mid-thirties, 7 AM is not that early to me anymore. My hubby still wakes up bright-eyed and bushy-tailed (ugh) on Saturday or Sunday morning and says, “It’s BREAKFAST TIME”.  Usually there is a dance that goes with this statement as he pulls out his most prized flea-market find, an old Griswold cast iron skillet that he lugged back from MARFA, TEXAS on a PLANE.

Sunday mornings in our home consist of putting on a record, firing up the cast iron skillet, and brewing a pot of coffee. Currently, I have Sturgill Simpson on repeat and this Brussels Sprout and Sweet Potato Breakfast Skillet heating up. This breakfast skillet is similar to a breakfast hash that I get at my favorite breakfast spot in KC called Urban Table. There is something about getting breakfast served to you in a skillet, am I right?

I love the flavors of this breakfast with the smokey bacon, seared brussels sprouts, caramelized onions, and sweet potatoes.  I season the whole shabang with a spicy kick from the chipotle powder and smoked paprika, adding to the smokiness of the bacon.

Oh and a few cook’s notes –

1. Be sure to dice your sweet potatoes rather small so that they cook all the way through quickly.

3. If you are serving this to tiny tots or people with a spice intolerance, I would hold off on the chipotle powder and use chili powder or nothing.  Chipotle powder is quite spicy.

4. To finish the whole thing off, cook the eggs separately to each persons desired consistency.  I love my eggs either poached or sunny side up, but the Breakfast Man likes over-easy eggs.

5. If you don’t have a cast iron skillet, cry yourself to sleep and hope that santa brings you one. But never fear, you can make this in a regular skillet OR you could even roast your veggies (tossed with olive oil) in a 450F preheated oven for 20 minutes, stirring halfway through cooking time. 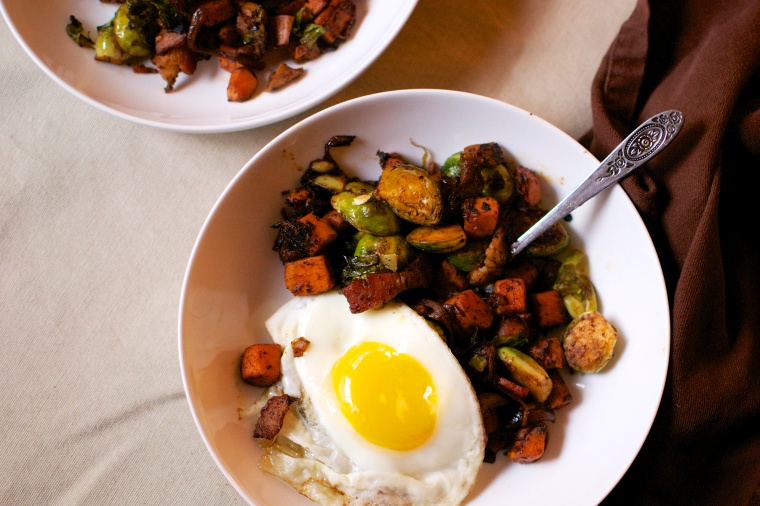 So throw on some warm socks, brew a pot of coffee, and pull out your skillet. BECAUSE IT IS BREAKFAST TIME!!!!!

1. Adapted from my favorite breakfast at Urban Table and How Sweet Eats’ Brussels Sprouts Breakfast Hash.

2. This dish serves 2 GENEROUSLY or 4 smaller portions. If serving a crowd, serve with a fruit salad.